Oh my goodness. I actually affect the world

For years I felt like I was rushing at work with loads of energy and good intentions, but not much impact on the world.

This is a picture of me as a student – a time where I felt I wasn’t making much of a difference (even though I did, sometimes). Making a cardboard person didn’t change the world.

Finally, I feel like things I do actually do have an impact.

The problem is – I don’t always know which things will have an impact.

Eventually I would like to target my time more sophisticatedly to make the best possible impact on the world. So here are 4 ways I have recently found out that I made an impact, beyond what I’ve been paid to achieve. END_OF_DOCUMENT_TOKEN_TO_BE_REPLACED

Filed under My current work 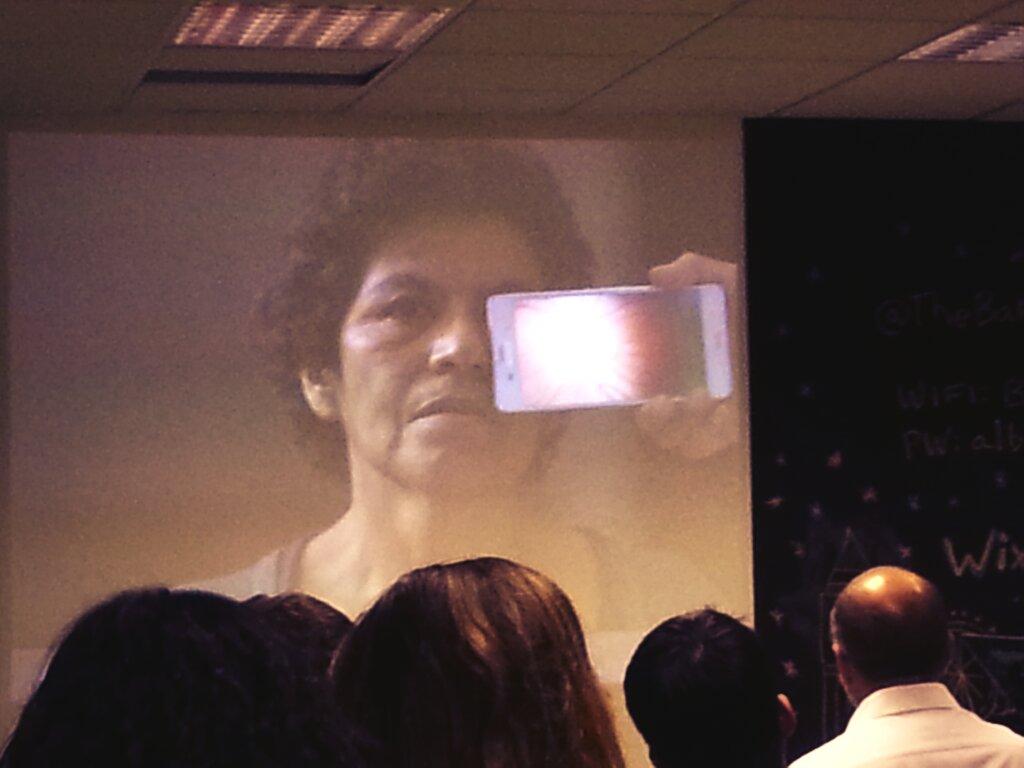 Last week I went to my first Tech for Good event. I was impressed at the quality of the projects that were being showcased. I am a social designer, and it was fantastic to hear what social design is going on in the tech scene.

The speakers were Digital Mums, The Good Data and Peek. The event was held in The Bakery near Old Street.

Find out how the event unfolded with photos here. If you’re interested in coming to the next one, join the MeetUp group. 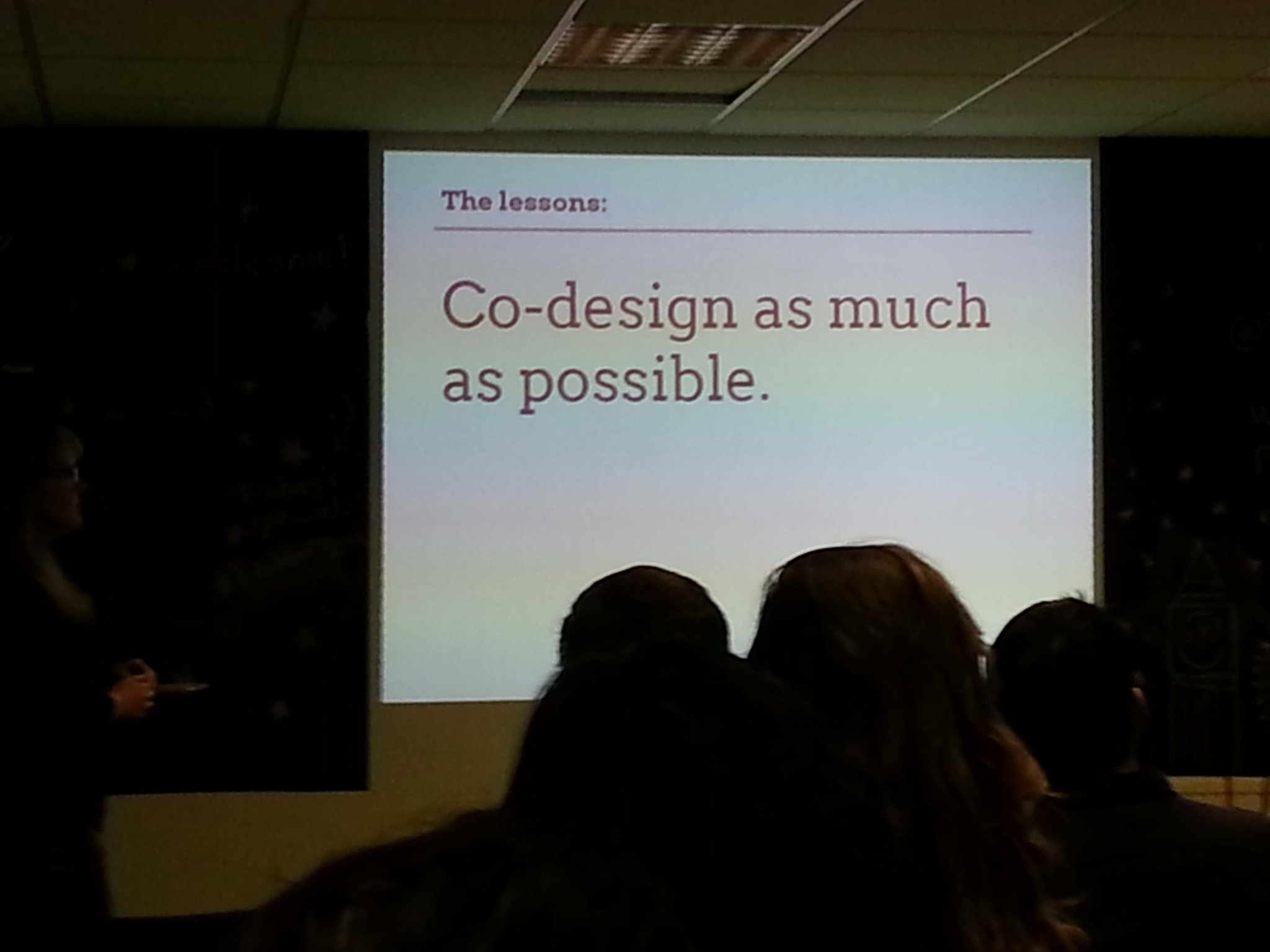 Adventures of a Well-Being Superhero

Last year at Goldsmiths, I did a design project on well-being. This was the result. END_OF_DOCUMENT_TOKEN_TO_BE_REPLACED

For four months now, I have been working for Circle. Circle is a not-for-profit service that brings people over 50 together through social, learning and wellbeing events. The aim is to tackle the growing problem of isolation amongst older people, whilst not relying on the welfare state. The events include local coffee afternoons, theatre and seaside trips, rambles, and how-to-use-Facebook sessions. People make friends and they have the opportunities to try new things.

Participle is a service design agency which tackles social problems through coming up with ideas for start-up services, and they came up with the idea of Circle. I have admired Participle’s work for a few years, so I am thrilled to be working for them. Circle has been around since 2009, so we have an office separate from Participle’s, but in the same office complex in Bermondsey near London Bridge. END_OF_DOCUMENT_TOKEN_TO_BE_REPLACED

Filed under My current work

There are several events and exhibitions in London this month that are worth going to.
Please click through to the links to book places on talks. END_OF_DOCUMENT_TOKEN_TO_BE_REPLACED

I was racking my memory to reference this idea to a student – I found what the name of the company was called after a good half hour! Posting it on here in case I forget again.

Telemadre is a social model where mothers whose children have grown up and left cook for young professionals and students for a fee. Through this, mothers can continue to cook as much as they would if their children were still at home, but they can package the food instead and sell it to local young people who aren’t as good at cooking. The idea is a community building project of sorts and this could classify it as social design.

Here’s an academic paper on it.

Are you a service designer?

If you are, please get involved in this inquiry about design for the public sector.

‘The Design Commission’s second project, sponsored by the Design Council, AHRC, and Capita, and co-chaired by Barry Quirk and Baroness Kingsmill, will look at the emerging area of theory and practice around ‘designing’ policy and public services. We believe many of the failings in our range of public services are usually due to outdated or inappropriately designed systems, and in most cases, redesign (and constant, rather than one-off, redesign) will be required to meet cost-saving targets, improve services, and make them more relevant. The purpose of the inquiry is to identify, and publicise, how good design practice can be brought to bear more often in the realms of policymaking and public service provision.’

They get them to do lovely projects like this one:

By getting designers to do these sorts of projects, they can make good marketing campaigns, and potentially get some ideas for new directions in their business.

Some people say these designers are bought out by the big companies to ensure they don’t become competition, but I forget the argument for that. What do you think?

I found the Goldsmiths stand 15 minutes before I had to leave for work. Can’t tell you how much I regret that! When I came in, I found them singing a song that they had written in response to a brief. The brief was something along the lines of ‘help me file my stuff because I’m really messy’. I love it that they wrote a song instead of designing a filing cabinet, which is what most students at New Designers would do. I think I’d be more likely to write a song than design a filing cabinet for that sort of problem now too – I’ve been Goldsmithsified! I don’t think other designers quite understand the value of that thinking.

END_OF_DOCUMENT_TOKEN_TO_BE_REPLACED

Following The Hybrid Jam Session, The Hybrid Food Supper was a celebration of refugees’ influence on our culture. Arabeschi di Latte designed the food (I think I counted as a temporary member of Arabeschi). The biggest design decision was how to serve the walton pie: with a slice cut? drizzled with something? We based our decisions on making sure the pie looked welcoming and not contrived.

So Far, The Future had a film installed. Someone had designed a table for the event, and a Swiss duo designed some napkins and aprons that were green and unusually round. A silent auction for these designs and the wine was held.

The starters were on plinths, with an art-you-can-eat vibe. Most people didn’t realise you were allowed to eat it, which was something that must be considered. A chef from Ottolenghi did the actual cooking, and he taught me a bit about food presentation – between each cut of the giant scotch eggs he had me wiping the knife. We put seeni sambol, a Sri Lankan dip, on top of the scotch eggs to make a hybrid dish.

The dessert was rice pudding with saffron. We also served baobab gin and tonic, and an elderflower and vodka drink.

People from the Design Council and Design Museum attended amongst other important design figures. The feedback was very positive, which was particularly rewarding after a day of frantic organisation of other people and putting most of it together last minute.