After the Polls: Predicting the Post-Election Landscape

Today I am at an RSA talk entitled ‘After the Polls‘. Normally I either live tweet or write notes on Evernote that I always intend to publish on this blog but never have the time to… so here’s a new approach: writing directly on the blog as the event is happening. It’s not quite live blogging because I will have a look over the text before I publish this – as I understand it, live blogging is a bit like a series of extended tweets, right?

‘Today’s event is about analysis, not advocacy’ – Anthony Painter, chair.

#rsaelection – consent to be governed within current structures eroding “we’re facing a huge fork in the road” pic.twitter.com/r5LrtVJx1e

Painter opens with the question ‘Is this election the most important election of our time?‘

Janan Ganesh says that the 2010 election determined fiscal policy at a fraught time. This election is not as important – markets are more relaxed. This is the closest election, though. 3 weeks out, we really don’t know who’s going to win. But why? Outsiders think that Cameron is a good PM. But it’s not just about leadership and the economy. It’s party brand – perceived values, whether politicians are on our side. The Tories don’t have a great brand, but they have a good leader and good fiscal policy. On the other side, Labour has a good brand, but not a popular leader or fiscal policy. In Ganesh’s experience, surprising people with something against the party line shifts votes.

Miranda Green doubts that this election won’t be a fork in the road. Well, fiscal policy is now set. But perhaps it is a fork in terms of how we’re governed. The coalition was an experiment. It’s proved that it can provide a strong government in peacetime. But could a coalition more than two parties work? And the Scots were thinking about leaving us. The referendum hasn’t settled the issue. SNP is rising. They might stop a Labour majority. People are deeply fed up. There’s a gulf between the electors and the elected. In 1950s, 97% voted Conservative or Labour, now they’re at a 3rd each. How will this resolve itself? Lib Dems had to join the roundheads – they’re not outsiders anymore, no longer cavalier. This doesn’t sit well for voters or themselves – they have to rebrand as sensible rather than radical.

Tim Bale explored two scenarios – whether Labour makes it or loses. If Labour makes it, Milliaband would make people feel welcomed because he is a good people manager. There will be cuts, but there will also be tax rises. After all general elections, the government bring in money raising measures. It’s probably going to be tax rises this time, so there might not be as many cuts as people think. Much of the Labour party has been in government already so there is a discipline and a professionalism around, still. Maybe they’ll form a coalition with Lib Dems. SNP must be careful or they may get blamed for bringing down government.

If Labour loses, Bale predicts, Miliband goes. A woman probably goes in. Whoever it is, they will pay lip service to decentralisation and unity.

Either way, Labour needs to make a better fist about what they can do. They need to prove they are close to people’s opinons. They need to rebuild their relations with business, and decide what to do about Scotland. It’s not an existental crisis for social democracy – don’t make a drama. (Miranda Green made a little face here.) We’ll ever get back to a politics where we can get to 40% again.

On party brands
Tories have rebranded from cruelty to compassion. Why wasn’t the branding exercise done earlier?, asks Green. They decide 23 days before polling day to switch sides – Tories become compassionate, Labour become a sensible fiscal option. This is a questionable transformation. The Labour brand is a disaster. People have to get over their lack of trust in Labour to even hear the policies. Labour have been using a differentiation strategy, but they should have been shouting about their positive actions instead.

Bale says that Labour has been talking about fiscal responsibility but without drawing too much attention to it – Balls as Shadow Chancellor spoke about other things at the same time so the papers grabbed other headlines. Long term Labour fiscal strategy went unnoticed.

Ganesh at this point says ‘there is this thing called the crash’. Modernisation dies after a crash. In a focus group, people were asked to draw images that they associated with parties. For Labour, people drew a guy on a couch on benefits. For Tories, they drew a smug family outside a massive house. Had Tories in 2009 said they were going to hit the rich, they may have won more votes.

Cameron made an effective first move in Ganesh’s opinion. Cameron did environmental stuff in 2006 when he first was noticed. The Tory brand was so bad, that all he had to do was something other than the brand, whatever it was going to be – he chose an environmental PR stunt and it was worth more that a policy.

Milliband made no attempt to produce images, says Bale. He should have done.

A problem, says an audience member, is that you don’t know if the party actually believes in the brand. This affects voter opinion and apathy. Ed Millband said confidently ‘Britain has moved to the left’, says Green. It would be inauthentic if Millband did a PR stunt against the party line. Lib-Lab could do a lot together because of the overlap. There are differences in ideology between Lib Dems and Labour though.

Ganesh says that people blame disillusion in politics on whatever data they are angry about. It’s all presentation, there’s not red-blue choices anymore. There’s no big idealogical choice – but that scared people. The surest way to lose an election is to neglect brand, and stake out a clear distinctive intellectual position. 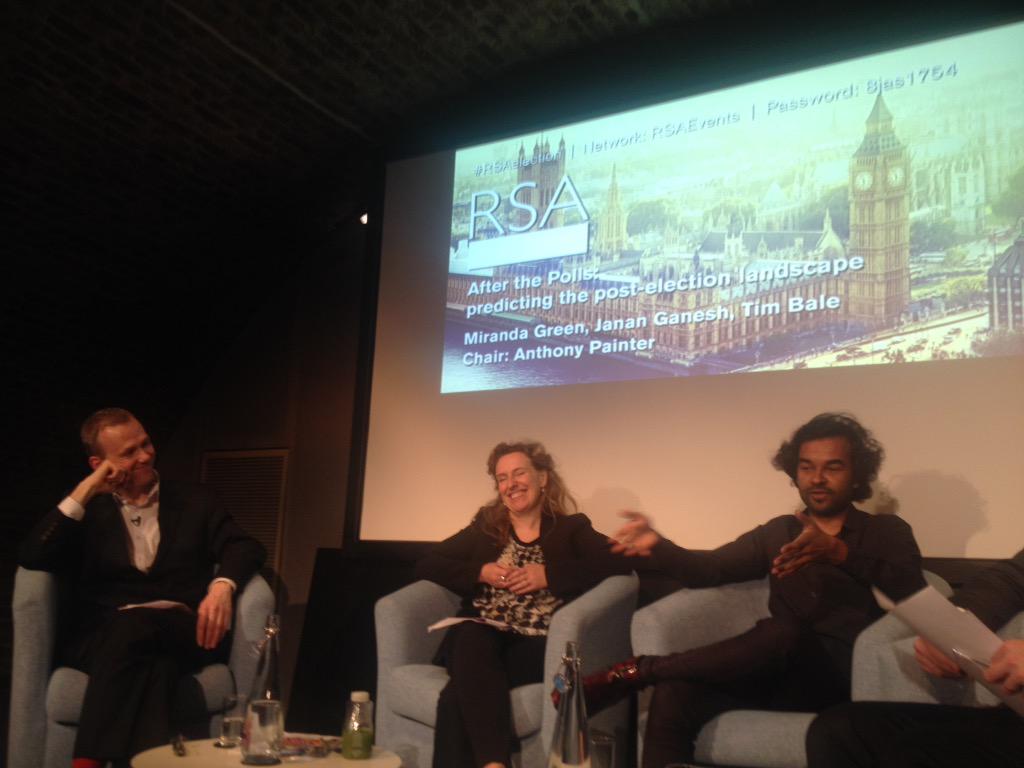 How long will it take Lib Dem to regain voter trust?
They paid an electoral price for actually being in government. Going into bed with Tories lost votes. But getting into bed with Labour could have lost other centrist voters. Doing that in the future could be seen as ‘flighty’, says Green. And why are Lib Dems feminised when in a coalition? It’s not fair on women!

What about UKIP?
If they get 4 or 5 seats, they’d be doing well, says Bale. Labour needs UKIP to score 10% to eat into Conservative vote. UKIP is not a long-term threat as it is now. Their supporters are grumpy old men. It’s probably a 10-20 year phenomenon – there aren’t enough takers in the younger generation for the UKIP brand of politics.

The crash happened – well, UKIP happened too. Cameron has had to respond to backbenchers on UKIP.

.@JananGanesh 'one of UKIP's achievements was to drive the Conservative Party insane in 2012-13 #RSAelection

Party spilts
People in one party have more in common with people in other parties than their own. If you redesigned parties, you’d make an Economist-FT party, says Ganesh. Each intake of Tories is more and more free-market, there are differences on Europe though.

The split in the Labour party is personal rather than ideological. With Lib Dems and Tories, it’s more ideological.

Lib Dems aren’t split, says Green. If Lib Dems are faced with the problem of who out of Labour and Conservative should be the moral winner, then there will be a problem. They’d have to negotiate a lot for a coalition. That might cause a split.

Who is going to be PM?
Bale thinks we’ll have Milliband as PM, Clegg as Dep, backed by SNP.
Green thinks we’ll have Cameron as PM, with a female Tory as Dep.
Cameron and Clegg – we’ll keep the status quo says Ganesh. This could be a continuity election, not a change election. But the numbers might not stack up, says Bale.
Painter believes we’ll have Milliband, with Harriet Harman for Dep, and it will be a difficult relationship with SNP.
He asked the audience to predict who would be PM – Miliband or Cameron. A quarter thought the former, and half thought the latter.

The polls may say otherwise but our panellists think that the reign of Cameron/Clegg will continue. #RSAelection

What I think
Personally I think that Cameron will probably win (I’m not endorsing him either way here). I don’t think Ed Miliband is a popular enough leader to win.

I think that party brand and the gulf between voters and politicians that Miranda Green alluded to is very problematic. I also think that Russell Brand has given thousands of people an excuse to not turn up to vote, which could affect voting turn out amongst young people. I think that engagement with politics is a bigger issue than who is actually going to win. The people I talk to express disillusionment and powerlessness about politics in general. They talk about this more than whether they will back a particular party. My generation cares more about electoral reform than who is going to be in government.

I have rarely encountered apathy, if you were wondering – and where there is apathy, it’s because of a lack of education, and not making the connection between ‘politics’ and one’s lifestyle.

The design opportunity
Our political system is overly complicated and not as democratic as most people would like. We vote for a local MP, not for a Prime Minister. Constituencies are varying sizes, but they vote in one MP each. Many people don’t know the difference between MPs and councillors. Our system is seen as the best way out of a bad set of options.

Now that politics has changed to become much more centrist, with lots of crossover, the time is ripening for an electoral change. We won’t have 40% majorities any more, so this will be a push towards a new system that works more satisfyingly. Coalitions might be more likely. Also, consider that eventually we will be able to vote online. What might our voting system look like in 20 years when we’re all voting online? If we didn’t have constituencies, how would votes be weighted?

What if there were no parties? What if each politician sat somewhere on a spectrum rather than not firmly within one party? What if all the parties were scrapped and named after newspapers, as Ganesh joked?

The speakers today talked openly and non-dismissively about electoral reform, so this is an area of work that service designers may very possibly be able to have a hand in in the next 10 or so years.

In the meantime
Register to vote in the election if you haven’t already. The deadline is the 20th April. If you aren’t sure who to vote for, take this test to get a better understanding of party policies. And don’t be afraid to ask basic questions about politics. There’s so much complexity that no single person understands how all of government works. Dig for information without shame. It’s not my fault that I wasn’t taught about politics at school, and it’s not your fault either.