So, being a student looking for chances to make good contacts, I took the opportunity to help Arabeschi di Latte cater for Studio Toogood at their exclusive party. I knew next to nothing about the event when I agreed to participate, and having been at it, I still don’t know that much about it apart from the food side. I recognised a few faces but couldn’t place them, including someone who said he was a journalist… I invited lots of them to the Designersblock private view on Wednesday, perhaps I’ll find out who they are then.

The theme for the party was iridescence, which happens to be one of my favourite words. The food was almost iridescent. Here’s the menu: 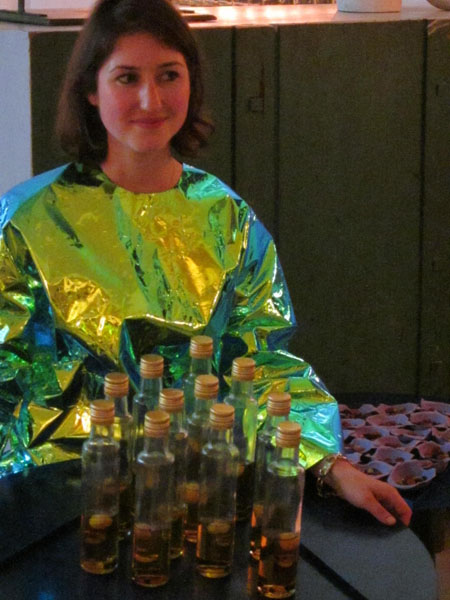 Blue risotto with verdana, damsons and crystalized violets. Served in a jar with a small fork.
Dark bread with smoked oysters, served on a mini plate. 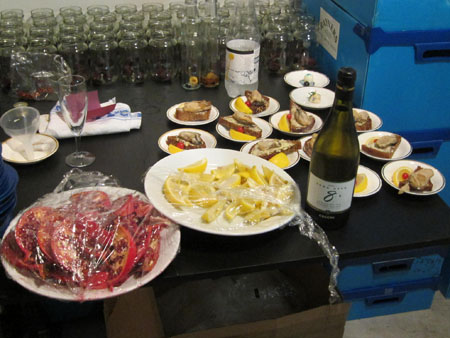 Everything was beautiful and delicious. The mozzerella balls with white chocolate were the stars of the show, along with the risotto. Everyone kept asking for more.

The DJ was pretty good. He played Steely Dan. I like a DJ who plays Steely Dan, especially twice in the evening.

Faye Toogood looked wonderful in her dress – in fact, everyone there was quite beautiful. Except us waitresses in the ridiculous dresses we had to wear. I don’t mind dressing up to waitress, and I wouldn’t mind simply modelling the dress, but serving at a party in a dress that cuts into your neck, does not let you bend down to pick things up or put things down, does not let you pour wine into tall people’s glasses, and lets no heat out and consequently makes you overheat, is just not on. 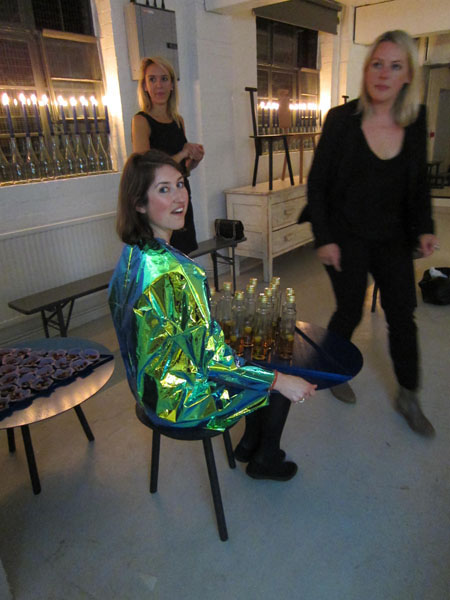 We had a bit of disagreement about how the candles should be laid out. Francesca laid out a random-appearing setting of candles in bottles, but the Studio Toogood people thought there were too many and the room would get too hot with 50 people and all the candles. There was suggestion of the candles being in a line but I’m glad it stayed as a forest of candles, minus a few – the room was already long, that didn’t need to be accentuated, and the food was on such small plates that the big table needed something big on it. Witnessing these creative differences between two groups of people is interesting – it was quite Englishly contained but you could see how strongly they felt about the styling of candles. Everyone got involved. I would have laughed if you’d’ve told me it took 5 or 6 designers to decide about the arrangement of candles for a one-off party, but at the time it felt like a serious, important decision. Funny that. 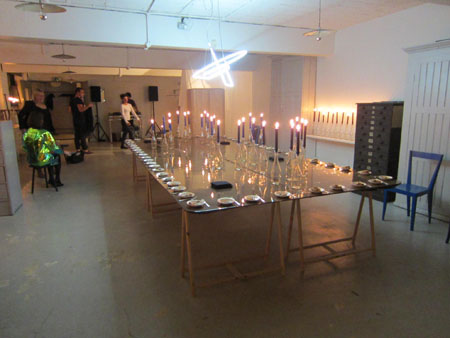 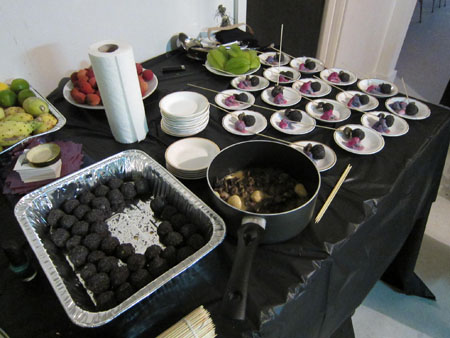 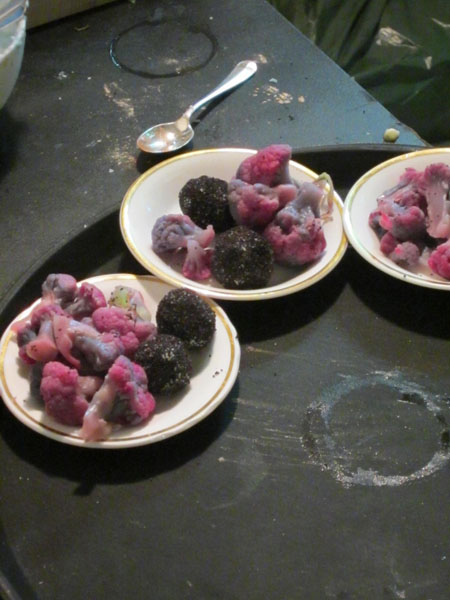 It was mad in the kitchen. The bathroom was through the kitchen so extra people kept appearing, queuing for the loo and picking on half prepared dishes… the chef was very stressed, especially since there was next to no preparation space because dirty dishes piled up too fast. That’s the problem with tapas.

Overall it was a stressful but exciting experience to be involved in. Pretty much everyone got drunk. Must have been the lychee vodka on top of the wine and golden water. Fingers crossed I’ll never have to model an impractical dress at the same time as waitressing for free again!

Filed under Designers, My current work